I (Donna) have been working with a 5th-grade girl in one of my groups whose struggles with friendships are arising from her talents. I was having a chat with the kids and asked the question, “what would you do with your class if you were the teacher tomorrow?” Her response was “to make a really hard math test because I am really smart at math and the other kids in the class are so slow”.  There was also a previous point on another day where I coached her on the comments she was making to another girl who was playing a game with her. This gal, I’ll call her Katie, has a photographic memory and knew where every piece was on the board and what had already been played. There was a tone in her voice that was coming through as condescending and showing off her skills in a way that was detrimental to her social success.

After the math-related remark, I pulled her aside and said I wanted to talk with her about her talents. I had her tell me what she felt her super skills were and we wrote them on the whiteboard. I also asked her to tell me about a couple of classmates, and as you can see, her answers were still pretty much from her own talents and frame of reference.

I then asked her to brainstorm with me all of the super skills that she thought people can have. We had fun coming up with a bunch and writing them down. I asked her if she felt she had super skills at everything on the board, and of course, she didn’t. I explained to her that while there may be kids in the class who are slower at math, we really didn’t have any idea what other super skills the other kids possessed. I suggested to her that it might be fun to find out. I also coached her that there is an important difference between sharing your super skills (for example, assisting another student with understanding a math problem) or showing them off, as in putting down the other kids for not being as knowledgeable. Everyone has super skills. Academics and sports are not the only ones and we need to be cognizant of celebrating all of the different talents that people have to share. 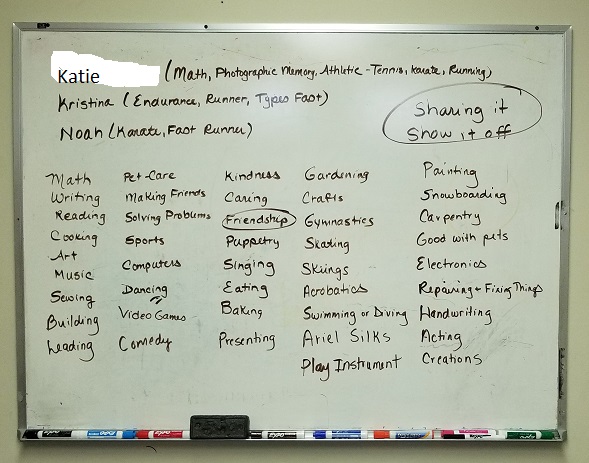